Valentine News and a COVER RAVE!

Our own Paula Stokes announced her second contemporary YA novel with HarperTeen, LIARS, INC. Release date pending, but stay tuned to learn more about this nitty gritty contemporary gem!

The Top Secret Valentine has been REVEALED! Give a big Valentines' welcome to Sara B. Larson, whose YA fantasy DEFY comes out Spring 2014 from Scholastic! Head on over to our Books! page to check it out, and be sure to add it (as well as all the other *totally unbiased* fantastic Valentines books) on Goodreads!

Are you ready for this?

No, seriously. ARE YOU READY FOR THIS?

We have THE FIRST official cover for a Valentines book! Some of you may have already seen its loveliness posted on the Books! page, but it is just so darn pretty, we decided it deserved its own announcement too. So I present for your proper oooing and ahhhing pleasure, the stunningly raw cover to A. Lynden Rolland's OF BREAKABLE THINGS! 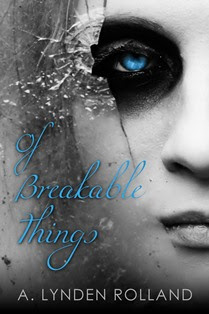 Alex Ash always stands out in a crowd. Blame it on her quick tongue or her attraction to trouble, but Alex is willing to bet most people know her name because of her illness. Living with Ehlers-Danlos syndrome is like living on death row, yet even as a prisoner in her own body, Alex is willing to fight for her diseased life as long it includes her best friend Chase and his rambunctious brothers. But when Chase’s entire family is tragically killed, suddenly her disease is a blessing in disguise. When death finally comes knocking, she is packed and ready to go- only to discover her life has just begun.

Eidolon is a secluded reservation which has existed for centuries as a safeguard and governing capital city for those spirits who are strong enough to linger once the body is gone. In a peculiar world where rooms can absorb emotions and secrets are buried six feet under, Alex finds herself to be the talk of the afterlife due to her infamous prophet of a mother who disappeared years ago. Suddenly standing out isn’t so great especially since the spirits who hunted her mother seem to have their sights set on Alex. Yet even amongst envious peers, daunting magic, and soulless banshees, the most difficult aspect of Alex’s afterlife is juggling between Chase and his reckless brother, neither of whom are willing to give up the girl they both love.

So much for resting in peace.
Posted by Sara Raasch at 8:00 AM

Every Tuesday we do interviews and rave about books we LOVE.

Every Friday we profess our LOVE via the Cupid's Arrows submitted by YOU!